Musings on the Elites

I remember often hearing my Uncle Frank Ackerman use the phrase, “common sense.”   He used it when he was frustrated at some statement, practice, or event that in his estimation defied “common sense.”

My hypothesis here is that “dirt farmers,” as Uncle Frank sometimes called himself, front-line workers of every kind, teachers, healthcare workers, first responders, and the entire group of grassroots people who live by “common sense,” just achieved a great victory in the recent election.

More broadly, this group, not just in voting, but in their everyday lives, uses their own interaction with friends, family, and co-workers to chart their own courses much more than they rely on the elites and experts who often assert that their leadership is superior and deserves more deference from ordinary folk.

I am troubled, too, by the current honor scandal at West Point, whose mission in part is to prepare an elite to lead the exercise of the power of military force under the direction of our civilian leadership. 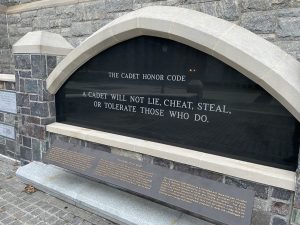 As a proud graduate of West Point myself, I see the example of prior graduates as the central origin in this scandal, especially those like Mike Pompeo.  In my class in contrast, there are many distinguished graduates with honorable careers.  Bill Taylor, Andrew Bacevich, and General William S. Wallace come to mind, as do many from the long gray line in history.

Pompeo, though, has set a very visible example of poor and dishonest leadership.  In his initial remarks as Secretary of State, he sought to foster General Patton’s “swagger” in the State department.  Swagger is not a term of diplomacy, but a military term, embodied by Patton’s conduct, meaning to act in a very confident and typically arrogant or aggressive way.

Pompeo rose politically as an acolyte for the Koch brothers as a Congressman in Kansas, after his business leadership resulted in failure.  His career is marked as an adaptable “yes man” to his political sponsors. The West Point honor code, on the other hand, requires truth, along with intolerance of those who lie, cheat and steal.

His Senate confirmation disclosures were misleading and consisted of lies and omissions to cheat the confirmation system.  Had he engaged in a similar deception at West Point while I was a Cadet, it would have resulted in his expulsion by the Cadet Honor Committee.   This failure of some graduates to lead by example with honesty has brought on the erosion of the Honor Code at West Point.

Similar deficiencies in our country’s traditional standards of honesty and fair play increasingly appear grounded in such failures of elites.

Fortunately, though, “common sense” at the grassroots is reasserting itself, as it just did in recent elections. Instead of following the lead of the big-shot pundits in the media or the deception of dollar dominated advertising by the political consultants, the grassroots stepped up in 2020 with a deluge of turnout.

Both sides in the election boosted their turnout beyond expectations. One side was battling against distrust of urban and political elites they believed were not listening or responding to their needs.  They achieved a record vote for its incumbent President while electing more members of Congress.  The other, spurred on by the excesses and damage of a failed incumbent President, responded to their fears by voting against that incumbent in record numbers, and in unexpected places, substantially overwhelming the opposing grassroots movement with their own.

I don’t think the elites have grasped this reality, though they still have time to study and examine the results and listen to “common sense” explanations that can inform them.  Perhaps that would help burst their self-confident bubble with some humility to overcome their swagger and blindness to realities.  I grant them little sympathy here in articulating my initial hypothesis of a general failure of leadership by the elites, whether political, media, corporate or moneyed interests.  Too often, they have been followers, riding poll results, excessive greed, and speculative theories of self-interested consultants. They have paid more attention to those wielding ratings and dollars that speak louder to them than “common sense.”

It is my hope that the grassroots will stay engaged. They may return quietly, though, to their daily lives with the confidence that their personal exercise of freedom will safeguard them in the future from the dysfunctions in our culture, political system and economy.  Only time will tell how that plays out.

← I Want You to Know We’re Still Here

3 Comments on “Musings on the Elites”