I Want You to Know We’re Still Here

“I Want You to Know We’re Still Here” by 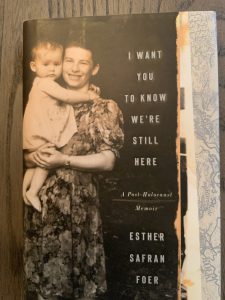 Esther Safran Foer is about a search for ancestors she had never met, and could not meet because they were victims of the Holocaust.

I found her book when I complained to the woman at the help desk.  “All your books seem to be written by celebrities and big shots,” I said.  I explained that I was looking for something written for and about ordinary people.  She gave me a real dirty look, like my request was completely out of order.  I stood there silently until she finally  asked in a most condescending way, “Did you look in biography?”   “I had,” I said, “and that’s where I found all that celebrity drivel.”

“Let me show you,” she said as she led me over to the bookshelf where I had already looked.  “Here, and here,” she said with her tone just a tad friendlier.  She had picked up two books off the bottom shelf, down where you can barely see the titles, unless you get down on your knees.  But she had found what I was looking for, and I thanked her.

Reading this one started off slow.  Esther’s mother and father were survivors when their small shtetl in Ukraine ceased to exist.  It was just beyond the pale where Jews congregated as subsistence farmers far enough away from the pogroms of persistent and dangerous anti-Semitic tribes.  In 1942, a German extermination unit, Einsatsgruppe C, arrived in eleven trucks and systematically assembled all the Jews in the villages, took them into the forest and machine gunned them into mass graves.  Both her mother and father ran fast enough and hid well enough to last out the war hidden by farmers or resistance groups until they later met in Lodz, near Warsaw, after the war.  They married there and lived in displaced persons camps until they maneuvered their way as refugees into the United States.

They didn’t speak of it.  The horror was simply too great.  As she grew to seek understanding why she didn’t know her grandparents, she learned that her father had also had a first wife and daughter in the shtetl, who were also victims of the German machine guns.  Her search began for her half sister and her lost ancestors.  The clues were few, just a few of scraps of old photos and names of places that no longer existed after their demise by machine gun and the burning and erasure of the shtetls from the map.

As her story unfolds in her book, the vague detail at first, the mis-connection between her silent parents and her youthful curiosity, turn slowly.  The futility and pain, of what led to her father’s suicide at a young age, contrasted with her mother’s silent suffering and became hard to read at first.  She pursued every nugget and fact and story until finally she returned to Ukraine to stand where her parents once stood.  The emotion and engagement in her story slowly builds and builds.  Her connections in Israel to other refugees and survivors gradually paints a more complete picture of why she seeks to feel as if those long-deceased ancestors need to know that their descendants are still here. Praying over their mass graves and remembering all she could find out about them compelled her.

It also leads to the thought that perhaps we all would prefer silence instead of learning about or remembering the horrors of this ugly picture of our recent history.  The detail and the building of its emotional consequence is important, though, because some tried to totally erase this picture and all that were in it.  Maybe the bookstores should move this book up to the top shelf and perhaps help restore our vision and end our silence.

← Rambling about Enigmas of the American Dream
Musings on the Elites →