Nine recent West Point grads say it is time for an anti-racist West Point.  The nine young officers, two former First Captains, a valedictorian, Rhodes, Fulbright, Schwarzman, and Stamps scholars among them, along with other cadet and athletic leaders at West Point, draw on their own experiences. The action plan they describe in detail seeks to activate an openness to change by high ranking officers and the Secretary of Defense.

Addressing the Generals at West Point directly, the group finds their public statements claiming no institutional racism at West Point inconsistent with the former cadets’ recent personal experience. Responding to Secretary Esper’s call for “actionable ideas” that can be implemented now, the group produced 40 slides of specific recommendations.  They included curriculum changes, removal of racist images and memorialization of the failed Lost Cause movement since the Civil War, and an end to systemic racism at West Point.

The leadership of these young lieutenants seeking to advance these ideals reminds me of my own successful challenge to the formerly unconstitutional practice of compulsory chapel at West Point more than 50 years ago.  I detailed my challenge to the West Point chain of command at West Point as a cadet and young officer in the Army in my book “Re-Making the American Dream.”  //www.re-makingtheamericandream.com/ .

They are seeking to work with the chain of command to advance the ideals of equality in our constitutional system, which they swore to support and defend in their oath as Cadets and as Officers in the Army.  This allegiance, not to careerism, or to support a particular political cause or party, or to oligarchs, or any other fallible men who distort and obstruct these higher goals, is a key result of the American Revolution.  As such leaders stand up to power, coercion and attempts to retaliate against them or limit their careers, they advance the American Dream and improve our important institutions like West Point.

Along with the successful compulsory chapel challenge, the addition of women to the Corps of Cadets and the successful cadet Black Manifesto in 1971 that opposed President Nixon’s effort to add Confederate monuments at West Point, these young officers join an important tradition of standing up for the American Dream despite organized resistance by some in our country.

In the outline, they take on the platitudes that have failed to deal with racism in America, calling instead for action.  Included in the curriculum action plan is a comprehensive review of all course materials to insure minority inclusion in the authorship and production of course materials and a new PhD-level Diversity and Inclusion Chair.

The proposal includes substantial changes in the veneration of Confederates and white supremacists, including

The proposal’s justification for seeking to dismantle racism and normalize anti-racism is peppered with quotes from a 2020 survey of cadets.  One told of reporting of a racial slur directed at the cadet, but upon reporting it, the cadet was instead accused of lying and an honor investigation was initiated.  One said an old grad told cadets racist jokes.  Another was told you are only here because you are Black.  Another’s roommate put a noose on his Black roommate’s desk.   The proposal seeks to refute official statements that there is no systemic racism at West Point, calling instead for a zero tolerance policy to be implemented against racial slurs, intimidation or discrimination.   Normalizing anti-racism is articulated as a way to build officers of character capable of leading diverse troops in the Army. 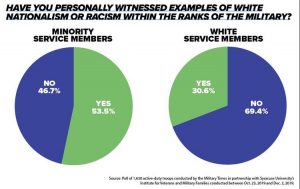 ← Where did our Liberty Come From?
Rambling about Enigmas of the American Dream →