Wars and Rumors of Wars by Roger L Shinn

I met Roger Shinn at the Union Theological Seminary in New York in 1970.  I was there with Cornelius Cooper, my classmate at West Point and fellow soldier in the 82d Airborne Division.  Shinn was interviewing him about conscientious objection and became an expert witness in Cooper’s Army hearing to become the first West Point graduate recognized as a conscientious objector. 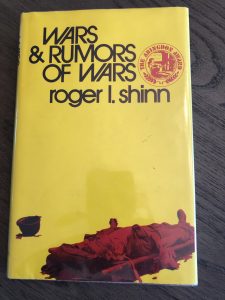 When Cooper’s hearing was scheduled at Fort Bragg, we arranged an Army staff car to pick him up at the airport, along with Cooper’s attorney, because Army regulations authorized government transportation for witnesses participating in official hearings on military posts.  I was impressed meeting with him again, especially hearing his testimony on the morality of war.

Shinn was not just a noted theologian.  He had also served as an infantry company commander in World War II.   He was definitely not a conscientious objector himself; he commanded troops in combat.  Captured in the Battle of the Bulge, he spent six months as a German prisoner of war.  His book begins with the notes he wrote on this combat experience right after the war.  His descriptions of infantry combat are riveting.  The much longer time he spent barely surviving in a POW camp and in relocation marches away from the advancing Russian army are revealing about the end of the war in Europe.

I didn’t learn about his book until Cooper commented on what I wrote about him in my book.  I find it refreshing to hear what others think about what I wrote about them.  It closes the loop and gives me perspective on whether my telling of their story made sense.  I thrive on such personal comments about what connected and what didn’t.  In his feedback Cooper reminded me that his recollection was sometimes different than mine, but he added what it was like to be written about a second time in a book.  The first was by Roger Shinn.  After that discussion I had to find and read Shinn’s book, written in 1972 as the Vietnam War wound down.

Shinn contrasts his experience as a combat soldier commanding troops in combat and his experience enduring German prison camps with that of five younger men who stood up differently opposing the Vietnam War.  He calls them five patriots.  One Air Force officer had been court-martialed after his conscientious objection petition was denied.  One refused induction into the military and became a fugitive.  One was wounded in Vietnam in a non-combat role after he refused to participate in combat.  One was found guilty of refusing induction into the military but received a suspended sentence from the federal judge on the condition of requiring him to work in the national interest.

Finally there was Cooper, who Shinn considered “a rare human being.”  He followed his progression of belief from the de-humanizing predicate to war apparent in military training, through the influence of Martin Buber’s writings that added focus to Cooper’s beliefs, to his final stage of deciding that non-violent resistance was a viable alternative to war.  Shinn, the brave and decorated company commander and a prisoner who nearly starved in a German camp, was moved by the actions taken on strongly held beliefs of these more recent young men.  Getting to know them stirred him out of slumber and skeptical indecision.  They led a noted theologian to “interrogate once again my own faith and actions.”

Shinn closes his book with a dense (for me) discussion of religious and philosophical concepts.   His chapter on the expressive meaning of war includes comradeship and heroism.  He concludes with hope despite conflict being a part of life.  But more than this, his graphic description of his own war experience, along with his contrast to the Vietnam resisters, is what drives this book and makes it well worth reading.

← Free to Believe: The Battle Over Religious Freedom by Luke Goodrich.
The Joy of Turbulence →