Free to Believe: The Battle Over Religious Freedom by Luke Goodrich. 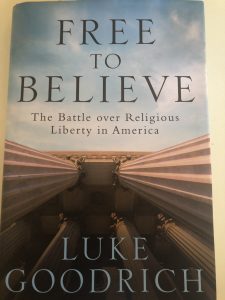 Congress shall make no law respecting the establishment of religion, or prohibiting the free exercise thereof. . . 1st Amendment, U S Constitution.

I learned in law school that this plain language of the Constitution includes an internal contradiction.   Sometimes the first clause, the establishment clause, and the second clause, the free exercise clause, can conflict.  They may even result in different results in some factual situations.   I tend to have a preference for the free exercise clause.  So does author and constitutional attorney Luke Goodrich.

In his opening chapters, he devotes little discussion to the establishment clause, totally neglecting the long history of religious conflict by Christians in Europe.  Both Catholics and Protestants in Europe both engaged in religious intolerance.  For centuries, they used unification of church and state as a powerful means of control of populations, many of which disagreed with their Kings and Bishops.   The hold of such coercion was broken decisively in the American Colonies and the American Revolution that led to our freedoms, guaranteed in our Constitution.

In my book, Re-Making the American Dream, I deal with the controversy at West Point about its traditional effort to maintain a religious establishment by the Department of Defense at West Point by requiring compulsory chapel attendance for all cadets.

In this book, the author focuses on recent religious freedom cases and the fears of Christians that those protections will erode in the face of cultural changes.   Some believe that disagreement with religious positions on abortion, gay rights, and challenges from Muslim or the “nones” who practice no religious beliefs could provide challenges to religious freedoms.

This discussion of recent free exercise cases is illuminating.  Many involve the complementary right of religious association.  Free exercise extends not just to belief, but also to the right to freely associate with others of common beliefs, and to live by those beliefs by implementing them individually or in concert with others.  In the simplest case he sets out in his introduction, a religious group with common beliefs is allowed to legally terminate from employment a school teacher who acts against a religious belief of the group.

Litigation on such issues often conflicts with laws dealing with anti-discrimination, universal health care, or expanded recognition of non-traditional marriage.  The valid governmental objectives such policies are based on are then often balanced by the courts against the religious freedom to associate and act on conflicting religious beliefs.  Those beliefs are not necessarily shared by those advocating the policies hanging in the balance.  The author’s discussion of the pros and cons of these cases is convincing, detailed and helps the reader understand the rationale behind recent controversial court decisions upholding religious freedom claims.

The author, though, is cautious about the trend for such cases to become fodder for culture wars, where religious people try to self-righteously extend their beliefs by court decree to apply to others who disagree. He advocates a different course where Christians can still hold true to their beliefs.  He advocates practicing important religious doctrines that call on avoiding unnecessary conflict by listening to others and seeking common ground and compromise.  Quoting religious teachings from the Bible, he argues that such methods are both more Christian in content and offer better protections against threats to religious freedom than using the coercive remedies of court decrees to protect or implement their beliefs.

If you are interested in this recent legal history, and its role in the culture wars, this book is worth reading.  For a more balanced view that focuses on the importance of the establishment clause and its history that initially fostered religious freedom, however, you should look elsewhere.

3 Comments on “Free to Believe: The Battle Over Religious Freedom by Luke Goodrich.”